Crowdsourcing the Future of a Social Movement
Across the country, LGBTQ Americans shared their hopes, fears, and ideas.

A year and a half before the historic U.S. Supreme Court ruling ended discrimination in civil marriage rights for same-sex couples, major funders and nonprofit leaders of the LGBTQ movement came together to address a concern: Would a legal victory mean a loss of momentum for LGBTQ equality and leave important issues unaddressed?

Instead of taking a top-down approach to setting the agenda for the movement’s next phase, these leaders wanted to explore the concerns on the minds of everyday LGBTQ people, particularly those whose voices often go unheard. Rather than surveying people on a predetermined set of issues, the leaders envisioned an open-ended conversation—essentially crowdsourcing the future of the LGBTQ movement.

Across the country, LGBTQ Americans shared their hopes, fears, and ideas.

Crowdsourcing incorporates stakeholder perspectives, amplifies the voices of the underserved, and ensures that initiatives reflect peoples’ daily realities. It’s one type of “co-creation”—the process of engaging beneficiaries, users or participants in the design, execution and evaluation of programs, products and campaigns.

To achieve this ambitious goal, the Hattaway team created Our Tomorrow: a digital grassroots campaign that engaged LGBTQ people across the country in a conversation about the future of the movement. With the help of 140 partner organizations, Our Tomorrow held 77 grassroots events in more than 40 cities and towns. The coalition also engaged people through the interactive website ShareOurTomorrow.org (see below). 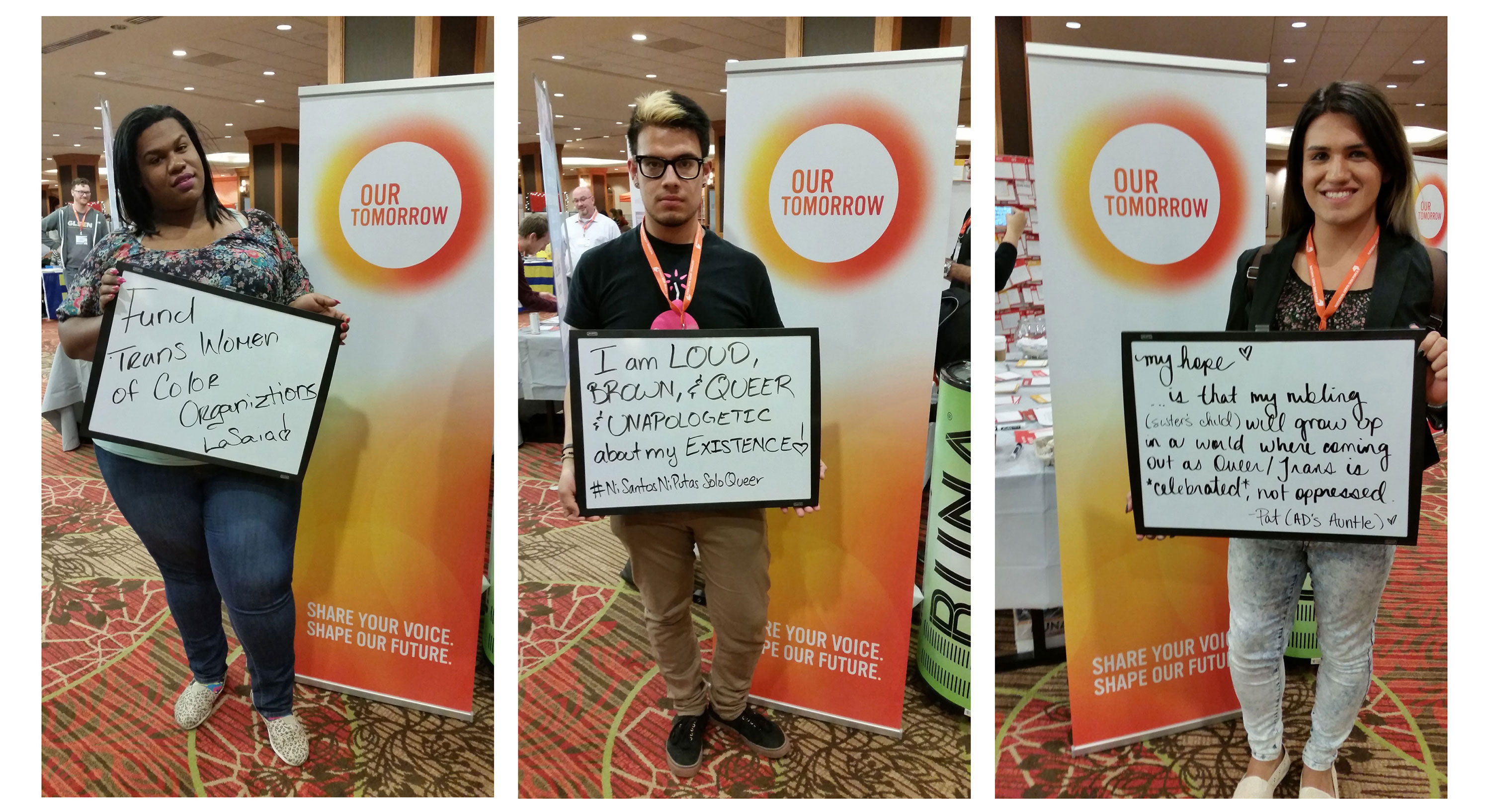 Our Tomorrow collected nearly 15,000 hopes, fears and ideas from more than 5,000 participants in all 50 states—creating one of the largest datasets ever about the concerns of LGBTQ people. Surprisingly, 85 percent of the submissions came offline, not over the Internet. Local events and grassroots outreach by Our Tomorrow partners were critical in reaching people from all walks of life, all across the country.

An interactive dashboard gave LGBTQ organizations on the local, state and national level access to these critical insights and information.

Researchers trained in linguistic analysis spent several months analyzing the submissions, and results were made available on an interactive dashboard for anyone interested. The conversation yielded surprising insights, such as the high level of economic insecurity felt among many LGBTQ people.

The Advocate—one of the country’s oldest and largest LGBTQ-focused publications—wrote that Our Tomorrow was “presenting a clearer picture than ever of the U.S. LGBTQ community.”

Today, these insights are helping our partners better understand the communities they serve, and informing their work to build a better tomorrow for all of us.

Explore the Our Tomorrow interactive dashboard

Crowdsourcing puts useful insights from thousands of people at the fingertips of funders, nonprofits, and individuals working to meet people’s needs. This type of data can yield valuable ideas for shaping movements, programs and initiatives of all kinds.
View the Our Tomorrow website 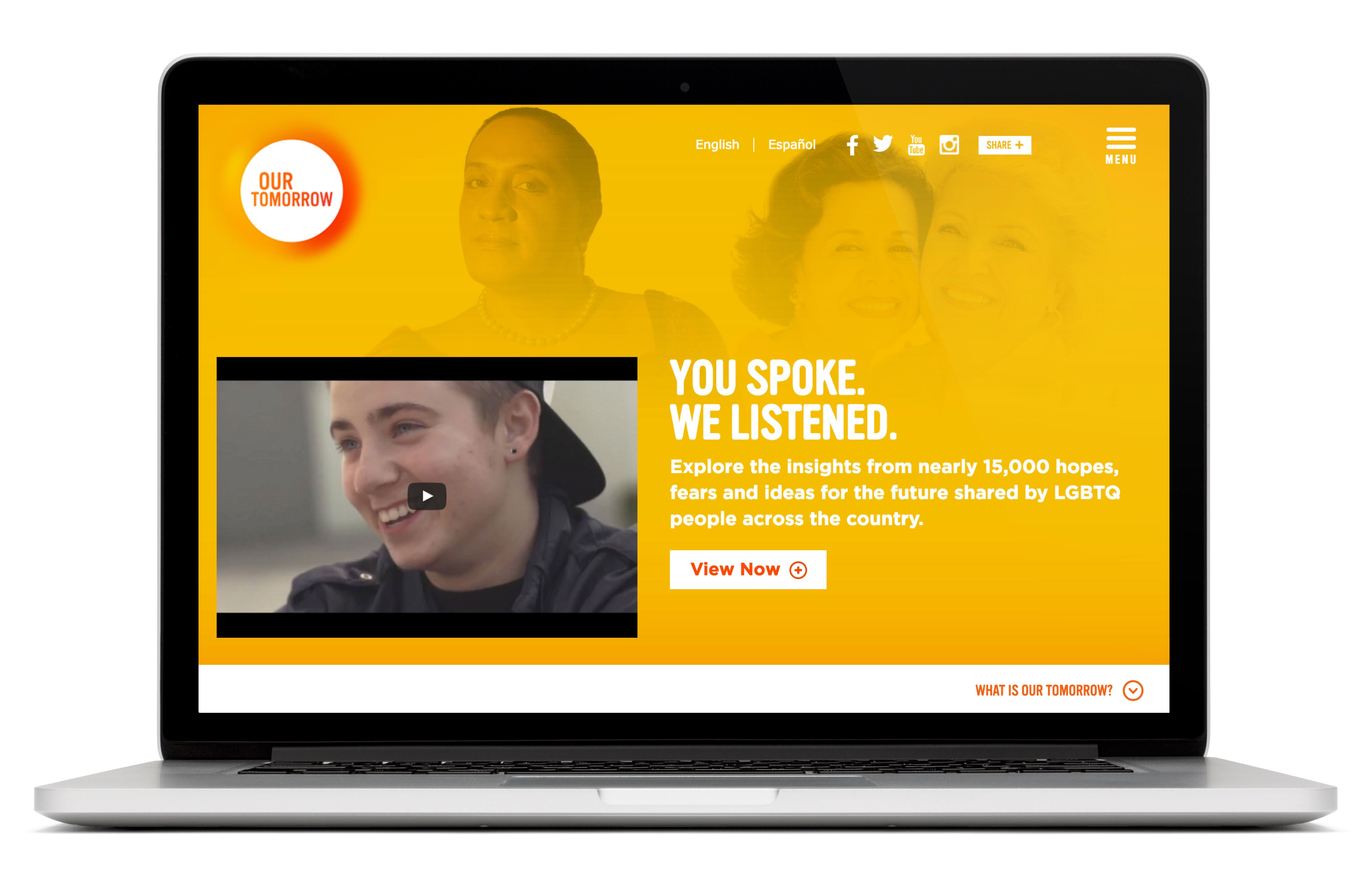 « Return to Stories
“Your talented team has done so much for so many good causes.”
Nonprofit Communications Director